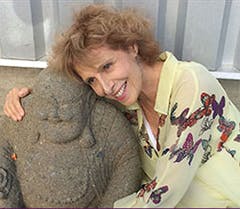 #85: It’s Never too Late to Laugh, Have fun, and Learn New Techniques to Build Your Confidence & Change Your Life With Jane Marla Robbins!

#85: It’s Never too Late to Laugh, Have fun, and Learn New Techniques to Build Your Confidence & Change Your Life With Jane Marla Robbins!

Jane Marla Robbins, a Finalist for a CAPS Grant in Poetry from the National Endowment of the Arts, is the author of the bestselling Poems of the Laughing Buddha; DOGS IN TOPANGA 2000-2018; and CAFÉ MIMOSA IN TOPANGA (winner, South California Book Publicists Poetry Award).  You can see and hear her read all three books on YouTube. Her poems have been published in many places, including The Cultural Weekly, Thrive Global, and The Scarlet Leaf Review.

Commissioned by the Kennedy Center in Washington, D.C. to write and perform the one-woman play Reminiscences of Mozart by His Sister, she also performed it in Lincoln Center in New York.  Her one-woman play in verse, Miriam’s Dance, about Moses’ sister, was produced in New York and Los Angeles, as was her two-character play, A RADICAL FRIENDSHIP, about Martin Luther King, Jr., and Rabbi Abraham Heschel, (starring Ed Asner). Jane’s best-selling self-help book, Acting Techniques for Everyday Life: Look and Feel Self-Confident in Difficult Real-Life Situations, and its accompanying deck of illustrated flashcards, won the Gold Axiom Business Book Award. Articles on her teaching, as well as her essays, have appeared in The Los Angeles Times.

In New York, she starred in her three-character play, Jane Avril. After its Off-Broadway run, the play was translated into Danish and produced in Copenhagen. Also in the same city, she starred in her Obie-nominated one-woman play, Dear Nobody, which she co-authored with Terry Belanger, and which ran for a year in New York, was produced on CBS for Camera Three, and toured to London and all over the United States. Jane’s play, Bats in the Belfry, was directed by Roscoe Lee Browne at the Spoleto Festival, and her one-act, Cornucopia, won the University of St. Thomas One-Act Play Competition

Join me in this episode and learn why Jane is a Kickass Boomer!

“When I see children be born, I remember what it feels like to be open to the mystery of life” – Jane Marla Robbins

“When you’re doing something, you love to do that will make a difference.”– Jane Marla Robbins